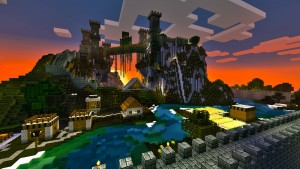 Was surprised to learn that Minecraft was one of the top popular video games. I thought it would be Assassin’s Creed, Call of Duty, one of those. Not so. The graphics of Minecraft are not even that engaging, or realistic, but clearly the game pattern of activity is. You get to do stuff. You think it all up yourself. You deal with lego-blocky mobbed zombies on your own. Terrible thoughts occur to you and you mow down Things with clunky Lego swords or perhaps throw up a bricky castle for defense and then go somewhere (I think) and gather strange squared foods and just in general live it up in terms of agency.

Interesting. I don’t play video games and actually don’t know anyone who does but I have been taken by the plots, and especially the comments on the games. I am heartened by the knowledge many of these young gamers have in terms of workable plots, characterization and narrative drive. Their criticism and comments concern all of the above and are very expert, knowing.

The one time I played it was Mortal Kombat with my grandson. He was terrible at it. I was visiting them in Maryland and tried to think about some way I could relate to Jimmy (James Robert Johnson III) and he said he wasn’t allowed to have Mortal Kombat but he had borrowed it from a friend. My DIL was gone so I said, ‘Come on, I’ll play with you’.

So I tore off his arms and legs and threw him over a cliff. We had a great time, especially since I won.