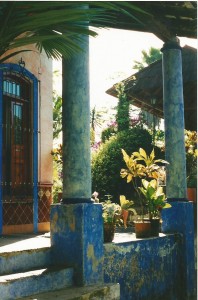 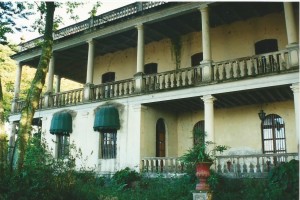 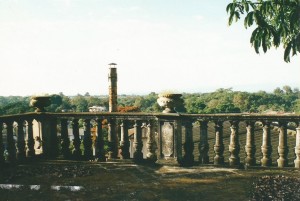 Staying with aforementioned friends in Coatepec, on the East Coast of Mexico (about thirty miles inland from Jalapa) — the Contreras family —- I had some time to myself while Jim and others of the family went to Zempoala. Julio Sr. told me about these hacienda main houses that still stood after their lands were taken away. So I took my camera and went to explore them. This one I slipped under a back gate made of chain link. Nobody saw me go in so I figured I was safe for the afternoon.

This one was from an estate that had comprised 10,000 hectares. All that remains is about an acre around this main hacienda house. The hacienda was called La Orduna (tilda over the N, can’t figure out how to do it)  and belonged to a family called Pascal. It was renovated 1907 but I couldn’t find out how old the main building was. 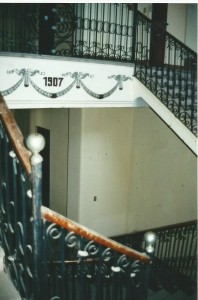 The land was confiscated by the revolutionary government (probably under Madero, about 1920?) and given out to — who knows. Who knows who ended up with the land. At any rate, all that was left of this great estancia was the main house. 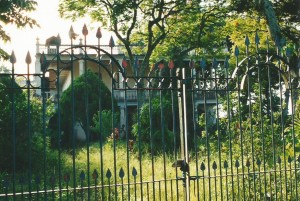 This one, Zimpizahua, is renovated and has been made into a hotel and restaurant. It’s just outside Coatepec. I drove the old Ford pickup there by myself, my (now ex) husband still being gone with the others to Zempoala. 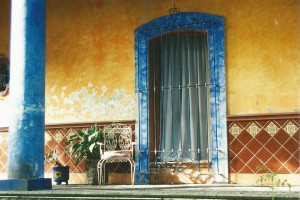 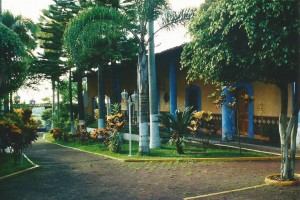 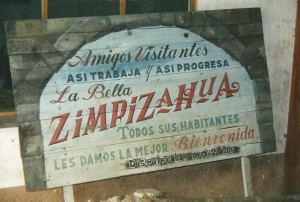 That translates as ‘friends and guests, thus we work, thus we progress. the beautiful Zimpizahua — and all who live here—give you our very best welcome. Excuse the renovations’ . I suppose they’re trying to make it pay? Who knows. No idea who owns it. There’s not a lot of tourism on Mexico’s east coast.  You see a lot of places like this — gorgeous, open to tourism, and no tourists. No nobody. Nothing going on. Nada. ??

Zimpizahua used to be a huge sugar plantation but now they only grow about eighty hectares of sugar cane (all the land that was left to them) not for sugar but for forage for cows. I suppose it doesn’t affect them. I know you can’t feed a horse sugar-cane stalks or leaves. This was the pool and aqueduct for the overshot sugar mill wheel. It’s now run off to one side. 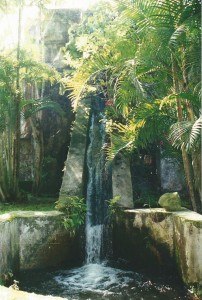 Stairway to the roof where the aqueduct ran (don’t ask me how). 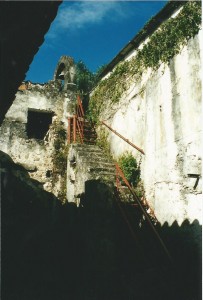 So I just climbed right on up. Nobody there to stop me or say no. I think I could have gone into the restaurant and cooked myself lunch. Here’s the tile roof and an ancient hacienda bell with the date 1819 on it. 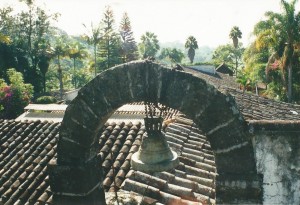 In the distance, which this photo doesn’t show, is the peak of Orizaba, 19,000 feet, a snow-cone. I had friends who climbed it, they said it was horrible, the snow was rotten and untrustworthy all the way to the top, dangerous. So it is with snowcapped mountains in tropical zones. But is it ever gorgeous.

Jim and I, driving around when we lived there in ’98, found other ruined hacienda main houses, some mere walls, very old. We stopped at one place up farther in the mountains where the vines had nearly obscured old walls, and the people in the tiny village there told us the names of the owners (I forget), complained that they never came back any more (ya think?) and somehow managed to convey that the hacienda owners  had a duty — noblesse oblige — to the people of the village and were neglecting this duty.

There is some effort to place and classify the old haciendas; Jaime Sr. (the architect) gave me this survey — it’s from a large book, he Xeroxed most of it for me. Very considerate. wish we had had time to explore more of these. 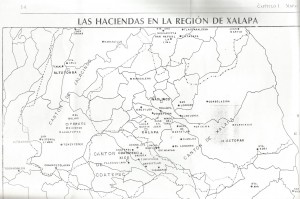