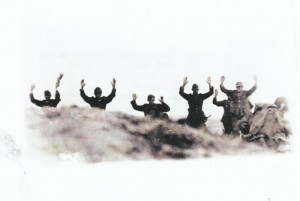 There are so many pictures of the wounded on the landing at Normandy, and I think this is because the photographers were not in the middle of the action, up forward. Mostly they were back with the wounded at the aid stations although some were in the first wave.

It is nearly impossible to protect yourself or be aware of enemy fire when you are looking through a lens and taking a picture. To go into action with your face up against a camera sight is suicidal. Although some have done it. I have been in fast-moving situations taking photos and you forget where your feet are, or anything else except that small field in your lens and so this is very dangerous to the photographer.

So this is one of the rarely-seen photos. instead of the wounded, here are the Nazi troops surrendering, which is, after all, what the soldiers were there for.

Shortly after this my dad was drafted into the Navy and spent a year on a destroyer escort, The USS Finnegan, in the Pacific. He was at Iwo Jima and the battle of Letey Gulf.