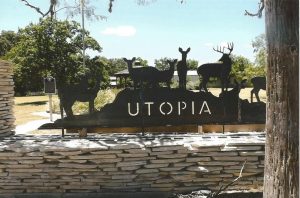 Much activity down at the park in the middle of town — a new rock wall and these lovely cutout sculptures are being put up. My guess is that the wide rock wall will become a sitting-place. The park is too open to be comfortable in the summer heat, but the wall will be entirely in shade. The only shade is the gazebo visible behind the central deer but, as I said, the rock wall will be shady. 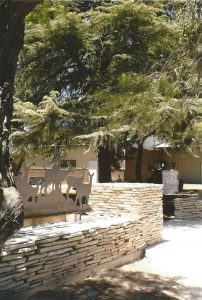 The big cypress is the one that is lit up for Christmas. 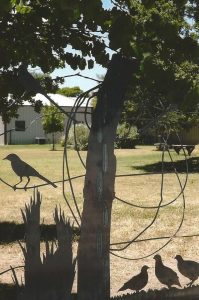 This is my favorite. It’s on top of the rock wall at the south end. A scrub jay and quail and metal cutout sculpture of a fencepost and probably real barbed wire.  The building on the far side of the park is the volunteer fire department/EMS ready room, where they have their radios, classes, computers, some bunks I think for those on duty.

Buck is in the backyard this morning, mowing the grass. Nice to have him up here at the house with me. My air conditioner in the study died, and without it, it gets to be about 120 F up here. I bought a new one, but getting the dead one out of the wall up here in the second story was daunting and I had no idea how to go about it. It was a big 16,000 BTU monster. It was flush with the wall inside and stuck out of the exterior wall about two feet.

Thought of just shoving it right on out of the wall and into the yard below. Called Mr. Brundage and he came with his son and he looked at it, then removed the guts, or the interior works, out of the housing, the frame, carried up my new one, and just inserted it into the old housing/frame. Problem solved. Duh.