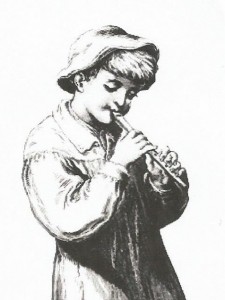 These tunes are hard to learn; Irish music is unexpected, with odd intervals, a phrase goes on longer and to odder places than one would think. Learning The Barney Pilgrim on my D whistle I have to memorize every note exactly, it doesn’t just fall into place as would, say, ‘Hard Times’. I wonder how old the Irish tunes are. Was watching a Youtube video on Aurignacian archaeological digs in France, and one of the archaeologists had made an exact replica of a bone flute that had been recovered —- 20,000 years old. Or more. It was holed exactly for the pentatonic scale. He played the first few bars of ‘Star Spangled Banner’ on it. That astounds me.  Back to Barney Pilgrim on this hot day (102), staying in the house except to go out and move the hose around from tree to tree.

And that kid has eight fingers on the whistle but in reality Irish whistles have only six holes. Details, details.