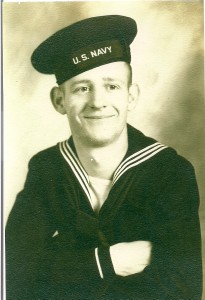 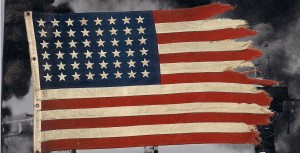 This is my dad, Seaman First Class Robert Leonard Jiles, of the Pacific Fleet, 1944-45. He was at the invasions of Iwo Jima and Okinawa and did escort duty on his ship, a DE named the USS Finnegan. He was one of the famous ‘tin can sailors’. He told us his DE (destroyer escort) was called a ‘tin can’ long before I knew the history of these little ships. He said, ‘our purpose was to draw fire, so the big ones could go on’. I thought he was joking.

The Finnegan also did escort duty for the fleet to Saipan and through the Marianas.

About Iwo Jima, he said the ships were lined up all around the island and pounded it without cease for a week to soften it up for the Marines. It didn’t do much good. He said he saw a ship to port get hit in the bow and catch fire and go down. He said you could see sailors streaming over the sides and into the water like ants. The Finnegan ordered nets thrown over the side and my dad went down the nets to help haul sailors out of the sea. 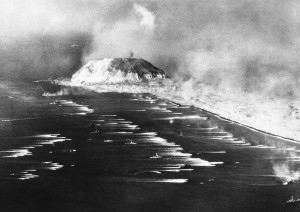 I can’t identify any ships in this old photo of the invasion of Iwo, but that is Mount Suribachi on the left, and enormous amounts of explosion debris.

They also had a kamikaze come at them but it was shot to pieces before it could hit them. My dad was at his post loading a gun and he said flaming pieces of debris were falling all around them. He just kept on loading ammunition.

To tell you the truth I think it was the best time of his life. The Navy doesn’t allow seamen to become alcoholics.

In one of his letters he wrote that when the news of the surrender of Japan came through you could hear men yelling and screaming with joy all around the fleet. He didn’t say where he was (Navy censors).  He said all the sailors threw their hats in the air “and it was like a skillet of popcorn going off”. He also wrote that where he was in port there were impromptu bands of ‘the Brits’ and others on shore walking up and down playing everything they could remember as loud as they could.

The flag above is, I think, the flag that was rescued during the attack on Pearl Harbor, it was from the USS Shaw; she went down with all hands. The story is that a sailor in a whaleboat looking for survivors (there were none) saw it floating and reached out and drew it in with a boat hook.

There were a lot more stories from my dad, but maybe I will write them down some other time.

Happy Veterans Day to all my loved ones who have served! Jim, Nadine, Daniel, Gary Edwards, my brother, Jim Sr., many cousins.