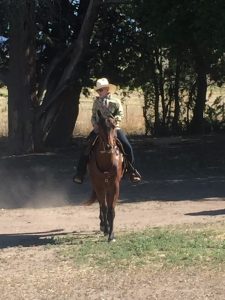 We made out to the NAN Ranch on the Mimbres in New Mexico, a ten-hour drive in one pickup with trailer and three horses. April drove all the way. We met at the Lonehollow Barn as early as we could and loaded up, an exhausting process and then started out. It was a beautiful place, near the Arizona border, the Mimbres Valley a long green oasis in the desert. I was worried about Buck’s health, still am. But he’s getting old! I’m old already! What can one expect, But April and June were great companions, hardworking and knowledgeable and funny. The ranch is mainly a guest ranch although they run some cattle up the valley — also up the valley was the archaeological site which we were not allowed on of course; spirits of pot-makers lingering around the ancient clay beds, listening to the sound of the only river for hundreds of miles. 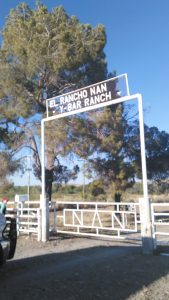 When we pulled in the gate was locked — they had forgotten to tell “the boys” to leave it open for us, so we had to climb over it and walk to headquarters, only about a mile, over a suspension bridge over the Mimbres.

I would load more pictures but this site is taking forever to load every photo. I get up and go downstairs and feed the dog and lay out my work for the next morning, come back up — still not loaded, still circles going around and around — and for this I got a new high -powered computer? I feel like drawing on the screen with a wax pencil.

So back home and no more traveling, Memorial Day today, thinking of my dad and his memories of Iwo Jima, when he saw the flag go up on Mount Suribachi — as always — got my flag up this morning. Rodeo last night down at the arena and from my place here on the ridge I could hear the announcer and the cheering and later the music from the dance. Too hot and too crowded for me but was relieved not to hear any sirens or medivac helicopters like last year, everybody okay, men and animals wrestling around in the heat and the dust, takes a lot of determination and guts. Also, nice to have the honor and prize money. Maybe some pictures from others if I can get them.