This is I think the first week of the siege of the Alamo. They were fighting for the constitution of 1824 (Mexico) and fought under that flag. 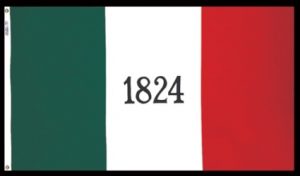 It happens so often; after a revolution all the intellectuals get together and think up great stuff and write it down in lega language and voila! a constitution. The politicos then proceed to not enforce any of it. They line their pockets. They totally ignore the law and oppress the working people.  The lived in secure areas guarded by men with guns. This happened with the Sovciet Union’s constitution of 1936 which, laughably, included freedom of speech. Then they sent Solzhenitsen off to the gulag for making fun of Stalin’s moustache. So the siege of the Alamo was about men trying to get the Mexican government to obey its own rules.

So all over my little town here in West Texas they put up the flags, every year; the Come and Take It flag and the blue flag with one star in the middle and the above. 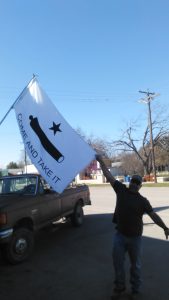 I was trying to catch it in a breeze and this guy came along and held it out for me.