I had a barbecue here two week ago and all the musicians came, Ashley Kay bless her little heart acted as hostess so I could talk to people and play with the band, and Ben Taylor cooked and brought friends and so the only picture I got from the whole shebang was one of the wonderful Bailey McLeod, who won this belt buckle for hog wrestling.

She said it was a very little hog. Every year they have a hog wrestling contest in the town of Sabinal, 20 miles south of here, and she went down to show the Sabinal girls how a hog should be wrestled and she won! Bailey is fifteen. Yay Bailey!

It was a great party. But you can see what the drought has done to my yard. After a while I just gave up.

Update; I couldn’t stand it. Decided to water and at least have one green, wet oasis in all this dun-colored, dusty, dead-grass dry and droughty land. This colorless land. I figured I had better do it now before we are under water restrictions. When I turn on the sprinkler the birds go mad with joy and chirp,twitter, sing and dash in and out of the sprinkler. Suddenly the trees out front are alive with birds.

And the intense colors of red and blue are a relief to the eye even if they are artificial.

Army Air Corps pilots listening to instructions shortly before D Day. They were so young. A lot of the pilots were in their early twenties.

I’m one day late for Memorial Day as I always post the picture of my Dad’s second cousin, James Marshall Jiles, who was with the Texas 36th Division and was killed at Anzio Beach March 1943.

This was from a page from Cleburne High School that was published in 2020 to honor veterans. His brother D.V. Jr. made it back home.

He lived in an online world. It’s a world where rage displays enhance your status. But of course your rage displays must be public. This is the exoplanet of selfie videos where the nobility can go into ecstatic rage and personal attacks , that have “the character of performance art”. A fantasy upper-class. Online contempt for the peasants, whoever they are. The street addresses are arcane and the living is cheap.

The news reports tell you about his mother, perhaps a drug addict, his grandfather, a felon, his real dad, long rap sheet, his mom’s boyfriend, more rap sheets, show photographs of their houses and photographs of Uvalde but he didn’t really live there. He lived in a country of shooter-games where fury is fashionable and he could dress himself in the invisible bling of anger chic. He was inarticulate but he knew all the acronyms; irl, idk,wtf. They say he didn’t have any friends.

He did. But they didn’t live in Uvalde either. They lived in the virtual nightmare city behind keyboard barriers.

Reporters are looking in the wrong places for his address, his high school, his workplace. He lived in another country. Online he was Napoleonic. Online was colorful and active. Friends. Enemies. Murderous beings that would never really kill you. Arrogance a virtue.

He didn’t really live in Uvalde but in the country of Fallout and Dead by Daylight and Call of Duty and Half-Lite2. A world of personal display and ego. He posted a video of himself screaming at his mom on Instagram. He posted Tik-Tok videos of himself punching the air, shooting. He was on Facebook too and the notorious Yubo. When he lost on Dead by Daylight he went into one of the spectacular rages of the on-line smart set as most narcissists do when they’re thwarted in any way, saying “I’m going to shoot up a school and it’s all your fault.”

It’s the new aristocracy. One can’t just go into a rage in the kitchen all by oneself. There’d be nobody to see it. The truly privileged used to be of the great, the few, the marvelous who had a venue in which to do their rage displays. One had to have a television show or a newspaper column. However, the Internet has democratized the whole thing and now anybody can live-stream shooting up a grocery store in Buffalo if one is insane enough or gluttonous for self-importance. Anybody can post videos on Instagram of themselves in a “uncontrollable” rage at their mother. Then you become hyperhuman and absolutely global and you are a pixel person and join the other divine or demonic images on the glowing screen. Status greed and narcissism have, one must admit, their evil and seductive appeal. To the weak. The damaged.

No, he didn’t live in Uvalde.

May they rest in eternal peace.

I don’t think it’s rained since October. Two weeks ago we had an inch and a half but in most places the trees are not really leaving out well and there’s no grass.

At any rate, here’s an angel of rain promise, it is a form of Beauty; she is an aspect of Hagia Sofia, she makes no compromises nor takes halfway measures, she is bigger than the both of us, she has either come back to this land or she was here all along in the second subvisual level of disappearance or concealment, she is noble. She confers nobility and courage on those who stand in her path, she is called rain.

I never posted anything about our trip to Big Bend and will do so now.

That’s June — we stopped for lunch on the Blue Creek Trail. She’s recovered wond4rfully from chemotherapy and all her hair has grown back, luxuriant and blonde as it was before.

Evelyn trying to clear branches so we can get further up the Blue Creek trail.

And then dinner at the Starlight in Terlingua.

The moon coming up over Christmas Mountain, just north of Study Butte.

And now today I am missing my friend Laurie Jameson. And so are many other people I know.

Thursday the 28th I drove to Hunt Texas — a beautiful area — as I was invited to speak to the Village Literary Society of Hunt, a great group of book-loving women who have been together for many years. Marilyn Butcher was the mistress of ceremonies. They were a terrific group! I love book clubs. Books are chosen by the readers, not professors, they aren’t graded, and people can agree and disagree all they want. So their questions are always informed, smart, thoughtful. And of all the groups I speak to, book clubs are most likely to ask technical questions about writing. And they baked me a cake! This is a goodlooking cake.

Is that gorgeous or what?

And March 22 I was in Keller Texas, a suburb of Dallas for another lively group centered on the Keller Library, and they were ready to laugh at all my funny stories, and in fact we laughed through most of the presentation and their questions, too, were astute and very smart. They were really fun. And the security guard asked to have his picture taken with me, said he was a devoted fan of News of the World!

He was a BIG guy.

Also a wonderful trip down to Castroville which I will put up in the next post. I had been invited there by at least three different Castroville historical groups, all intent on saving every last little stone house, we had a lot to talk about as the old stone house Jim and I had restored in San Antonio’s Historic District (King William Historic District) was called the Huth House, and the Huth family was an old Castroville family that were seed dealers. I asked my dear friend Evelyn to come and go with me (she drove) for a free dinner and fun. Those are such good groups of people in Castroville and I’m honored to have been asked to speak and Evelyn was a hit because she’s so pretty and personable — and of German descent too. I will get that post up as soon as I can.

My IT helper guy, Harold Nelson of River PC helped me figure out this new WordPress format and I am still getting used to it.

I read reviews online that said all the new bells and whistles were great for professionals and people who conduct business online but were confusing for computer illiterates like authors and occasional posters. So at any rate, I will get Evelyn to send me photos of the Castroville trip as I was too busy to take any.

And so between then and now the horse girlfriends have been to Big Bend and East Texas, my editor Jennifer Brehl has started on work on The Solitary Photographer (working title) yay!!! and my music group has played now for three different funerals, dear older people, passed away, we sent them off with song.

I spent sometime with Harold Nelson of River PC today figuring out the ins and outs of the new WordPress complications. Harold lives in a tiny town 10 miles north of my tiny town, and he does wonderful work all over this area keeping people up to speed. So many city people have moved in out here, often building very large beautiful houses, because they can work online. So things are changing fast.

And so the finished manuscript (finished so far) is with my editor Jennifer Brehl and am just waiting on her editing suggestions.

The working title is The Solitary Telegrapher.

I won’t be posting here any more for some time, WordPress has changed everything, and now there is this complicated mess about”blocks” and no place to add media (pictures) and I just don’t have the time to spend all morning and half the afternoon figuring out their clever new terminology about bl0ocks, classic blocks, other kinds of blocks and so on. So my blog is shut down for the foreseeable future. 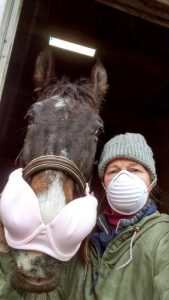 My cousin sent me this — this is not my cousin, somebody got it off the Internet. I needed a laugh today.