SHE’S IN COMMAND SHE’S IN CONTROL SHE’S BAD AND MEAN AND ON A ROLL!

Mary Sue gets where she gets without training, without experience, without bothering to learn anything about armaments, science, geology, terrain, or people. She becomes an officer without learning anything about leadership skills, she becomes a commander simply by commanding things be done. Hardened space sergeants rush to do her will. 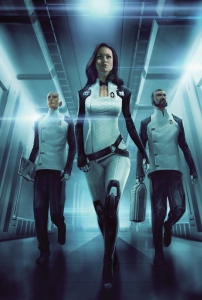 My friend and author Caroline Woodward wrote a book with a truck-driver main character, and she actually found somebody who would teach her to drive an 18-wheeler, at least for a short distance, and she learned to back it up. 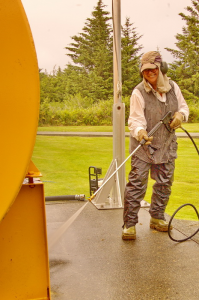 That’s Woody pressure washing the fuel tanks at the lighthouse landing pad. She and her husband Jeff are lighthouse keepers.

My last experience with a Mary Sue type in sci-fi was a doozy. I will not name the book because the author is actually pretty good. And as I said in my last post on this subject, the e-book list is actually the new slush pile. 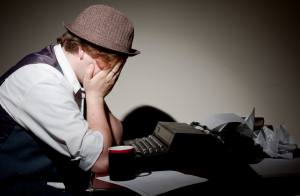 And the Amazon commenters, bless them, are the new ‘junior assistants’.  I noticed on this latest Mary Sue I just read that many were giving advice to the author,  they were trying to be helpful, giving her compliments as well as pointing out absurdities, making suggestions etc. It was really nice. Heartwarming. 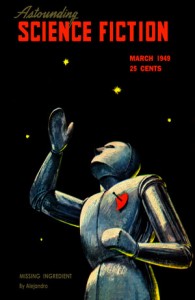 So — tools: — Pace your book. Use narrative summary to slow it down (probably in a flashback) or an alternative scenario. The Martian‘s hero is constantly in danger of his life. This is very tense reading, and it is all in direct scenes told in the first person. It is slowed down by — not narrative summary — but by shifting the scene to the space center where at least people’s lives are not in imminent danger and it shifts to third person as a relief from the intensity of first person. The pacing — shifting between these two scenarios — is excellent.

—- Science fiction inevitably means world-building. This means you are going to have to know something about different classes of people, different geographies, perhaps about weapons, vehicles, food sources, perhaps even animals. It seems to me that most of the new sci-fi e-books are written by people in urban middle-class, upper-middle-class, comfortable surroundings who never get out of their small social circle. So work at it. If you have never been in a slummish area, if you have never worked with large animals or hiked mountains or driven heavy equipment or been around military people or people of other cultures, think about it. 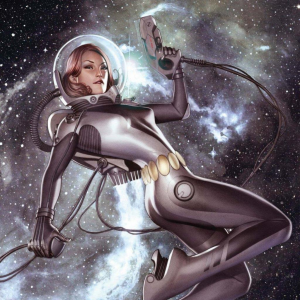 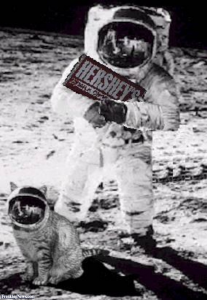 All in all, the e-book list is exciting and promising:  the reviewers on Amazon are really quite generous and helpful. That in itself is amazing. 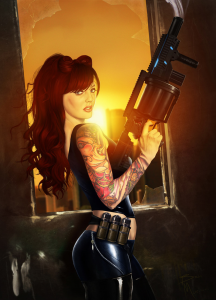 This essay has to do with science-fiction, dystopian and fantasy fiction; balancing your narrative. Ballast and avalanches.

I have been discovering the ‘Mary Sue’ character often discussed on the sci-fi blogs. More about her later.

New e-book authors have no editors. I can, however, live with typos. But there is other sorts of advice that editors can give which will not be available, nor will the readers at the publishing company be there to give advice. However, the commenters at Amazon, I find, are really quite helpful and nice with these self-published e-books. At any ate, there are no university/college classes teaching people how to write action narratives, and so of course I had to jump in.

Balance. All action narratives should be balanced between narrative summary and direct scenes. Read Making Shapely Fiction. I try to include at least three to four pages of narrative summary for every ten pages of direct scenes. It has the effect of a sonata, moving between slow, meditative music to a second movement far livelier. Pick up, slow down. Pick it up, slow it down.  You will soon enjoy the dance. Your reader will not put down the book in exasperation.

Because this is a truth; the reader becomes dulled and exasperated by chapter after chapter after chapter of direct scenes. I have seen e-books that have had three chapters, one after the other, all in dialogue. And since your e-book is cheap, expendable, and the reader can order a long sample, you don’t want to exasperate and bore them right away.

Narrative summary is ballast. Direct scenes and dialogues are avalanches.

No matter how interesting your characters or fluid your writing, nobody can long endure three chapters in dialogue. And no matter how fascinating your action figure, readers will tire of endless action. 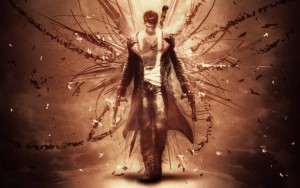 What is a direct scene? Dialogue or narrative that takes place moment-by-moment. Narrative summary is an overview, either as a flashback or continuation of the narrative, in which time is compressed. It works very well for flashbacks. Here’s an example from Pawn In Frankincense; by Dorothy Dunnett;

About half-way between Aleppo and Chios, it came to Jerott that he hated ichneumons. Afterwards, with the mountains, the steppes, the gorges behind them; having lived through the sleepless days in the stifling heat of the tents and passed the laboring nights in the saddle of his small Turkish horse which could walk or gallop but was unable to trot, or on the jolting back of one of the two hundred camels in their long caravan, Jerott was prepared to admit that for many reasons that long journey, six weeks in all, between Aleppo and Constantinople was one of the worst in his life. Through all the miseries of mosquitoes and dust-storms, of stale meat and sour milk and brackish water, through the perpetual cries of the camel-men…there rode at his side Pierre Gilles discoursing in Latin on the glories of Constantinople…

So you have six weeks packed into a paragraph or two. This is slow time. Direct scenes are fast time. If you care about your craft — and there is a reason for each — you will learn narrative summary. For some reason, many people struggle with it. Other people seem to be able to write nothing else.