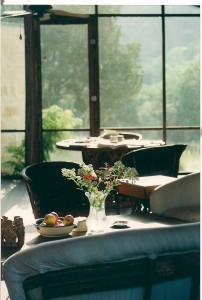 And so this is where I was on 9/11. Jim and I were reconstructing an 1899 stone house in San Antonio and I took every opportunity to get away. This was a weekend retreat loaned to me for several days by friends, outside San Antonio, Pipe Creek. I was working on Enemy Women; peace and silence. I turned on the radio that morning to find some classical music station before starting work on the manuscript, and ABC radio news was on and they stayed on. The first plane had just hit the tower and they were speculating that it was an accident.

And so the morning went on. I never got a yard away from the radio. Finally packed up and returned to San Antonio. Everyone in the house was sitting in front of the TV and completely silent. They were silent all day. I found that strange. No one said a word.